THE DISCOVERY OF TIBET – THE ORIGIN OF ANATOMICALLY MODERN MAN

Indian literary traditions suggest that the Anatomically Modern Man may have originated in Tibet. The Tibetan Man exists as a distinct member of Modern Human Family. Tibet and Tibetan Man do not share the identity of China and the Han Chinese Man. While Tibet is one of the most sparsely populated areas of the world, the origin of Anatomically Modern Man can be discovered in Tibet as the rest of the world hosted other members of Hominin Family that disappeared with the arrival of Homo sapiens. Sapiens as a new subspecies of Homo sapiens.

Excavations at the site of Nwya Devu in central Tibet.

(Institute of Vertebrate Paleontology and Paleoanthropology)

· A team of researchers says humans first set foot on the interior of the Qinghai-Tibetan Plateau around 30,000 to 40,000 years ago.

· That’s about 20,000 earlier than previously thought.

The discovery of 3,600 stone artifacts in Tibet’s high plateau suggests humans inhabited one of the earth’s harshest environments far earlier than previously thought.

According to a paper published this week in Science magazine, a team of researchers from the Chinese Academy of Sciences says humans first set foot on the interior of the Qinghai-Tibetan Plateau around 30,000 to 40,000 years ago, which is some 20,000 years earlier than previously believed.

According to archeological evidence, the region is one of the last habitats colonized by Homo sapiens, which is not surprising considering the harsh conditions.

“The high altitude, atmospheric hypoxia, cold year-round temperatures and low rainfall of the plateau creates an extremely challenging environment for human habitation,” according to a press release.

The plateau is known as the “roof of the world” and remains the third least-populated place on Earth. 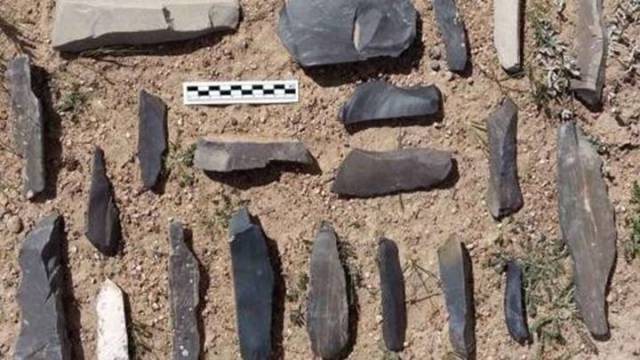 Stone artifacts on the surface.

(Institute of Vertebrate Paleontology and Paleoanthropology)

The team confirmed the timeline after finding stone artifacts at the Nwya Devu Paleolithic site located 15,000 feet above sea level in the Changthang region of northern Tibet.

“It really is the first robust case to be made that there were human populations on the high plateau,” Jeff Brantingham, an archaeologist at the University of California, Los Angeles, who studies the peopling of the Tibetan Plateau but was not involved with this study, told National Geographic.

Interestingly, no DNA was found on the stone tools so it is difficult to determine who made them.

“The authors used the word ‘Tibetan’ a lot, and they act as if the people they’re looking at are in fact Tibetans — they’re not,” National Geographic explorer Mark Aldenderfer, an archaeologist at the University of California, Merced, told the magazine. “We don’t know who these people were.”

Some studies indicate most modern Tibetan ancestry traces back to a population that separated from the Han Chinese roughly 9,000 years ago.

The archaeologists at the Nwya Devu say the tools are nearly identical to tools recovered from Mongolia and Xinjiang.

The site is about 186 miles northwest of Lhasa, the capital of Tibet, and is the oldest and highest early Stone Age (Paleolithic) archaeological site known on Earth.

The Weather Company’s primary journalistic mission is to report on breaking weather news, the environment and the importance of science to our lives. This story does not necessarily represent the position of our parent company, IBM.