This article is in response to a claim about Samkhya or Sankhya Doctrine found in ‘GURBANI’ Holy Book of Sikhism. Firstly, I state that I have not met any person of Sikh faith who may not believe in existence of Infinite God. Because of that Belief or Faith, they attend Worship Service to seek wisdom of Guru with sense of devotion, respect, obedience, and humility.

Secondly, to discuss the validity of Samkhya or Sankhya doctrine, I have to discuss each term used in conversation. For example, the term ‘AKASA’ simply refers to Earthly phenomenon and it demands interaction between Light rays and Earthly atmosphere apart from presence of living things with faculties of Sense Perception.

WHAT IS PRAKRTI OR NATURAL ENVIRONMENT?

I ask my readers to reflect on one particular term at a time to focus on the subject matter. Again, my concern is not about God’s existence. There is not even one term used by Sankhya Doctrine that is inferentially correct. For example, the understanding of ‘PRAKRTI’ or Nature or Natural Environment is flawed. Every living thing establishes its own existence by separating itself from its external environment. Every Living Cell functions by separating itself from other Living Cells even if all the Cells represent the same Living Organism. Prakrti refers to external, environment of specific Living Things. In modern Science it includes Physical, Social, Cultural, Political, Economic, and Biological Environment. Other Living Things present in my Environment determine my Actions and my Human Behavior. While ‘PURUSHA’ is an individualized term, Prakrit includes other Purushas and all other Living Things including Bacteria and Viruses.

For each Living Thing exists as Individual with Individuality, Self-Identity, Self-Recognition, Ego, and Ahamkara is prerequisite for sustaining reality of existence.

The Sankhya doctrine does take reason into account. It considers perception, inference and reliable testimony as three reliable means to knowledge. 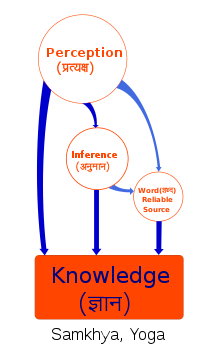 The Samkhya system espouses dualism between consciousness and matter by postulating two “irreducible, innate and independent realities: puruṣa and prakṛti. While the prakṛti is a single entity, the Samkhya admits a plurality of the puruṣas in this world. Unintelligent, unmanifest, uncaused, ever-active, imperceptible and eternal prakṛti is alone the final source of the world of objects which is implicitly and potentially contained in its bosom. The puruṣa is considered as the conscious principle, a passive enjoyer (bhokta) and the prakṛti is the enjoyed (bhogya). Samkhya believes that the puruṣa cannot be regarded as the source of inanimate world, because an intelligent principle cannot transform itself into the unconscious world.

Prakṛti is the first cause of the manifest material universe — of everything except the puruṣa. Prakṛti accounts for whatever is physical, both mind and matter-cum-energy or force. Since it is the first principle (tattva) of the universe, it is called the pradhāna, but, as it is the unconscious and unintelligent principle, it is also called the jaDa. It is composed of three essential characteristics (trigunas). These are:

Some evolutes of prakṛti can cause further evolution and are labelled evolvents. For example, intellect while itself created out of prakṛti causes the evolution of ego-sense or ahamkara and is therefore an evolvent. While, other evolutes like the five elements do not cause further evolution. It is important to note that an evolvent is defined as a principle which behaves as the material cause for the evolution of another principle. So, in definition, while the five elements are the material cause of all living beings, they cannot be called evolvents because living beings are not separate from the five elements in essence.

Samkhya regards ignorance (avidyā) as the root cause of suffering and bondage (Samsara). Samkhya states that the way out of this suffering is through knowledge (viveka). Mokṣa (liberation), states Samkhya school, results from knowing the difference between prakṛti (avyakta-vyakta) and puruṣa (jña).
Other forms of Samkhya teach that Mokṣa is attained by one’s own development of the higher faculties of discrimination achieved by meditation and other yogic practices. Moksha is described by Samkhya scholars as a state of liberation, where Sattva guna predominates.

Classical Samkhya argues against the existence of God on metaphysical grounds. The following arguments were given by the Samkhya philosophers against the idea of an eternal, self-caused, creator God:

Therefore, Samkhya maintained that the various cosmological, ontological and teleological arguments could not prove God.