I AM THE NEW ARMY BOSS PREPARE FOR WAR

Dynamics of terrorism is constantly changing; Army must think ahead in that direction

Lt Gen Bipin Rawat has taken over as the head of the 1.3 million strong Indian Army, succeeding General Dalbir Singh Suhag. Rawat, whose appointment had kicked up a row, was designated as Army chief by the ruling NDA government ignoring protests from opposition including Congress.

“I salute our martyrs who made supreme sacrifices in upholding honour of the nation,”Gen Dalbir Singh said while speaking to the media.
Good principle, “action must speak louder” is itself displaying his valour. Appreciate !ShashiKumar KB

He also thanked government and Prime Minister Narendra Modi for ‘their full support and giving free hand in conducting the operations’. He further thanked the government for ‘granting One Rank One Pension to armed forces’.

“Indian Army is fully prepared and well trained to tackle any challenges, be it external or internal. I strongly believe that actions must speak louder than words,” he said.
India must prepared for war, more surgical strikes against Pakistan possible’ 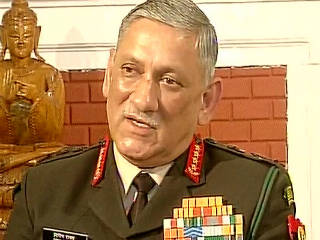 Army Chief Gen. Bipin Rawat In a major statement, Indian Army Chief Bipin Rawat on Tuesday said that further strikes against Pakistan can’t be ruled out.
“Further surgical strikes against Pakistan can’t be ruled out; the strikes were meant to send out message,” Army Chief Bipin Rawat said in a conversation with NDTV.
The statement by the new Army Chief comes two days after he said that the role of the force is to maintain peace and tranquillity at the border but it will not shy away from flexing its muscles, if the need be.
Also, talking to news agency ANI, Rawat said, “Want to modernise operational logistics, ammunition depots being modernised, computerisation of ordnance inventory being done.”
On OROP, Rawat said, “Demands till a certain extent fulfilled, would like to urge those veterans sitting at Jantar Mantar to return home.”
Priorities
“My 1st priority is to boost Indian Army’s moral and make every jawan believe that they empower our force,” Army chief Gen Bipin Rawat told ANI.
“2nd priority is to technologically advance and modernise equipment and weapons, so that jawans protect borders even better,” Rawat added.
Ready for wars
“PM Narendra Modi had said that the wars in future will be brief and intense, we are ready for it; staying alert is important,” Rawat said. (PM ne bhi kaha tha jo aane waaley yudhh hongey, intense aur chhote honge, is ke liye hum tayyar hain…satark rehna zaroori hai)
On war
“We’re always ready for war, it’s our job but life of civilians in border areas will be badly affected by such things,” Army chief Gen Bipin Rawat said.
“We are emphasising on army aviation, want to include armed, attack helicopters here,” Rawat added.
Gen Rawat
Rawat took over as the 27th Army chief on Saturday.
General Rawat had superseded two senior most Lt Generals — Praveen Bakshi and P M Hariz.

Dynamics of terrorism is constantly changing; Army must think ahead in that direction: Army Chief Bipin Rawat

Army Chief Bipin Rawat on Monday said that dynamics of terrorism is constantly changing, and that Army must think ahead in that direction.

“The fact that terrorists infiltrating from adversary’s side means that they are getting support from them (Pakistani forces),” the Army Chief said in an exclusive interview with the Times Now.

“We also have to think ahead, and ball has already rolling in that direction,” the new Army Chief said.

On surgical strikes, Rawat said that it was well thought through operation and India has sent across a message with the strikes that attacks won’t be tolerated.

He further said Indian Army will not shy away from a second surgical strike if peace in the region is disrupted.

The new Army chief also lauded the soldiers and officers who serve in the most challenging terrains, including those who have fought insurgency.

One thing is clear this general means business….He was also involved in the planning of well executed surgical strike in September.Jitendra Chaturvedi