My father, Professor R. Suryanarayana Murthy taught Indian History to College students in various educational institutions spread across Madras Presidency and later Andhra Pradesh of India. He was inspired by India’s legendary hero Maharana Pratap of Mewar Kingdom. He named my elder brother as ‘PRATAP’ to give honor and to celebrate the legacy of Maharana Pratap.

2. Bold from Childhood
He was bold and brave right from his childhood and everyone was sure that he was going to be a very valiant person as he grew up. He was more interested in sports and learning to wield weapons rather than general education.

3. Coronation
During Maharana Pratap Singh’s time, Akbar was the Mughal Ruler in Delhi. His policy was to make use of the strength of Hindu kings to bring other Hindu Kings under his control. Many Rajput kings, abandoning their glorious traditions and fighting spirit, sent their daughters and daughters-in-law to the harem of Akbar with the purpose of gaining rewards and honour from Akbar.

4. Before the king died
Before his death, Rana Uday Singh appointed Jagammal, the son of his youngest wife, as his heir. Although Pratap Singh was elder to Jagammal but he was ready to give up his rights like Prabhu Ramchandra and go away from Mewar but the chieftains did not at all agree with their king’s decision.

5. Courage
Besides they were of the opinion that Jagammal did not possess qualities like courage and self-respect which were essential in a leader and king. Hence it was collectively decided that Jagammal would have to sacrifice the throne. Maharana Pratap Singh too gave due respect to the wish of the chieftains and the people of his kingdom and accepted the responsibility of leading the people of Mewar.

6. Unbreakable Oath to free the ‘Motherland’
The enemy had surrounded Mewar across all its boundaries. Shakti Singh and Jagammal, the two brothers of Maharana Pratap had joined Akbar. The first problem was to gather enough soldiers to fight a face-to-face war which would have required vast money.

8. Concern
His only concern was to immediately free his motherland from the clutches of the Mughals. One day, he called a meeting of his trusted chieftains and made an appeal to them in his serious and lustrous speech. He said, “My brave warrior brothers, our Motherland, this holy land of Mewar, is still under the clutches of the Mughals. Today, I take an oath in front of all of you that till Chittod is freed, I will not have food in gold and silver plates, will not sleep on a soft bed and will not stay in the palace; instead I will eat food on a leaf-platter, sleep on the floor and stay in a hut. I will also not shave till Chittod is freed.

9. Brave Warriors
“My brave warriors, I am sure that you will support me in every way sacrificing your mind, body and wealth till this oath is fulfilled.” All the chieftains were inspired with the oath of their king and they too promised him that till their last drop of blood.

10. Rana Pratap Singh to free Chittod
They helped Rana Pratap Singh in fighting for Chittod and joined him in his battle against the Mughals; they would not retreat from their goal. They assured him, “Rana, be sure that we all are with you; waiting only for your signal and we are ready to sacrifice our life.”

11. Battle of Haldighati
Akbar tried his best to bring Rana Pratap under his clutches; but all in vain. Akbar got angry as no compromise could be arrived at with Rana Pratap and he declared a war. Rana Pratap also started preparations.

12. Shifted his capital to Kumbhalgad
He shifted his capital to Kumbhalgad in the Aravalli range of mountains which was difficult to access. He recruited tribal people and people dwelling in forests in his army. These people had no experience of fighting any war; but he trained them. He appealed to all Rajput chieftains to come under one flag for Mewar’s independence.

13. Pratap’s Army
Rana Pratap’s army of 22,000 soldiers met 2,00,000 soldiers of Akbar at Haldighat. Rana Pratap and his soldiers exhibited great valour in this battle although he had to retreat but Akbar’s army was not successful in completely defeating Rana Pratap.

14. Chetak
Along with Rana Pratap, his faithful horse named ‘Chetak’ also became immortal in this battle. ‘Chetak’ was seriously injured in the battle of Haldighat but to save his master’s life, it jumped over a big canal.

15. Chetak fell down
As soon as the canal was crossed, ‘Chetak’ fell down and died thus it saved Rana Pratap, risking its own life. The strong Maharana cried like a child over the death of his faithful horse. Later he constructed a beautiful garden at the place where Chetak had breathed its last.

16. Akbar’s attack
Then Akbar himself attacked Rana Pratap but even after 6 months of fighting the battle, Akbar could not defeat Rana Pratap and went back to Delhi. As a last resort, Akbar sent another great warrior General Jagannath in the year 1584 with a huge army to Mewar but after trying relentlessly for 2 years, even he could not catch Rana Pratap.

17. Harsh destiny
Wandering in the jungles and valleys of the mountains, Maharana Pratap used to take even his family with him. There was a constant danger of being attacked anytime from anywhere.

18. Proper Food
Getting proper food to eat was an ordeal in the forests. Many times, they had to go without food; they had to wander from one place to another without food and sleep in the mountains and forests. They had to leave the food and immediately proceed to another place on receiving information about the enemy’s arrival.

19. Trapped in catastrophe
They were constantly trapped in some catastrophe or the other. Once the Maharani was roasting ‘bhakris (Indian bread)’ in the forest; after eating their share, she asked her daughter to keep the left over ‘bhakri’ for dinner but at that time, a wild cat attacked and took away the piece of ‘bhakri’ from her hand leaving the princess crying helplessly.

20. Piece of ‘bhakri’
That piece of ‘bhakri’ was also not in her destiny. Rana Pratap felt sorry to see the daughter in such state; he got angry with his valour, bravery and self-respect and started thinking whether all his fighting and bravery was worth it. In such a wavering state of mind, he agreed to call a truce with Akbar.

21. A Poet’s ovation
A poet named Pruthviraj from Akbar’s court, who was an admirer of Maharana Pratap, wrote a long letter in the form of a poem to him in Rajasthani language boosting his morale and dissuading him from calling a truce with Akbar. With that letter, Rana Pratap felt as if he had acquired the strength of 10,000 soldiers. His mind became calm and stable. He gave up the thought of surrendering to Akbar, on the contrary, he started strengthening his army with more intensity and once again immersed himself in accomplishing his goal.

22. Devotion of Bhamashah
There was a Rajput chieftain serving as a minister in the regime of forefathers of Maharana Pratap. He was very much disturbed with the thought that his king had to wander in forests and was going through such hardships. He felt sorry to know about the difficult times Rana Pratap was going through. He offered a lot of wealth to Maharana Pratap that would allow him to maintain 25,000 soldiers for 12 years. Rana Pratap was very happy and felt very grateful. Initially, he refused to accept the wealth offered by Bhamashah but at his constant insistence, he accepted the offering.

24. Last wish
Maharana Pratap was lying on the bed made of grass even when he was dying as his oath of freeing Chittod was not still fulfilled. At the last moment, he took his son Amar Singh’s hand and handed over the responsibility of freeing Chittod to his son and died in peace.

25. Historical Importance
There is no comparison in history to his fight with a cruel emperor like Akbar. When almost the whole of Rajasthan was under the control of the Mughal Emperor Akbar, Maharana Pratap fought for 12 years to save Mewar. Akbar tried various means to defeat Maharana but he remained unbeatable till the end.

26. The Great Maharana Pratap
Besides, he also freed a large portion of land in Rajasthan from the Mughals. He underwent so much of hardship but he preserved the name of his family and his Motherland from facing defeat. His life was so bright that the other name for freedom could have been ‘Maharana Pratap’. 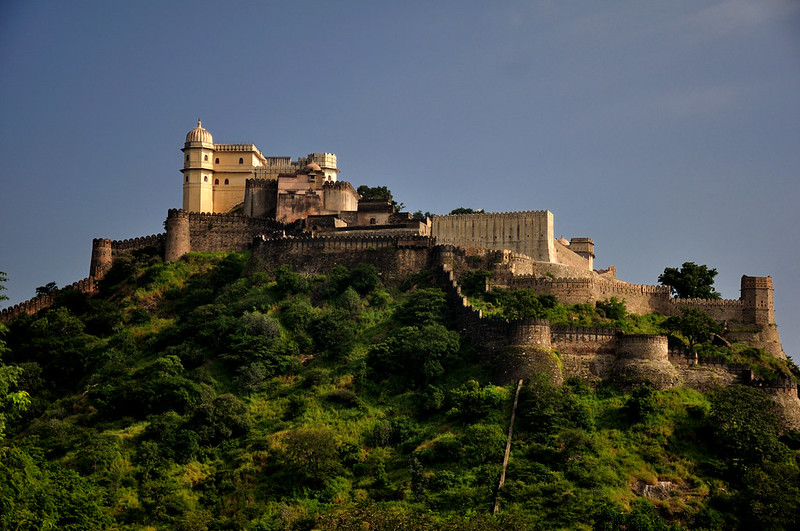 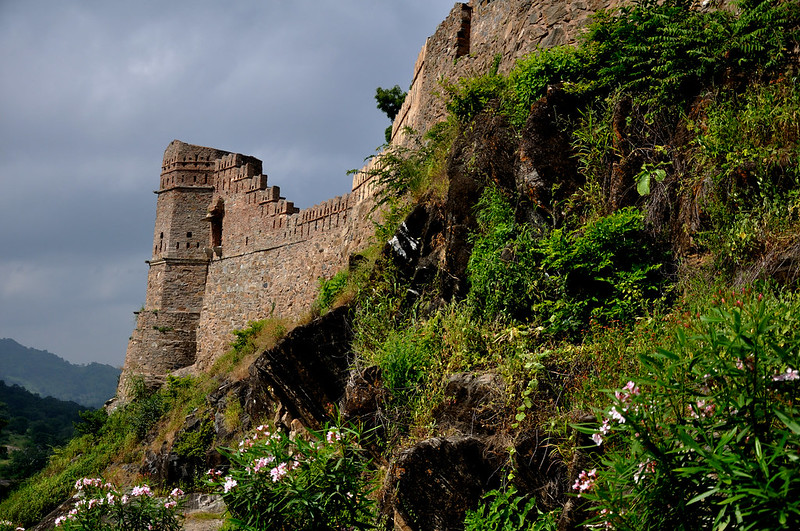 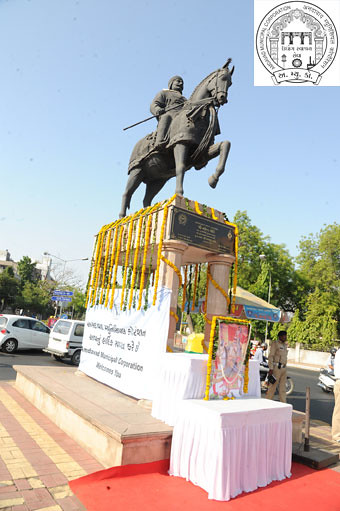