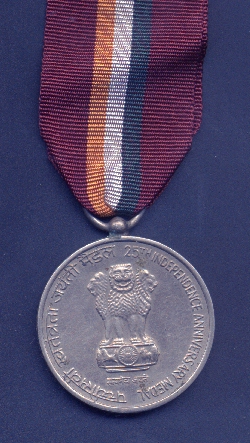 INDIAN INDEPENDENCE – A MEASURE OF MY LIFE

I record major events of my life in relation to India’s independence on August 15, 1947. The Father of the Nation, Mahatma Gandhi was assasinated on January 30, 1948 and my life’s journey became associated with the story of this young nation.

This medal was awarded to commemorate the twenty-fifth anniversary of Indian independence in 1972. The medal was awarded to all members of the armed forces, paramilitary forces, and police forces who were serving on 15 August 1972. This medal gives me an opportunity to remember the twenty-fifth year of my life. I was then serving in Indian Army in the rank of a Captain and was posted at a unit located in the North-East Frontier Agency which is now known as the State of Arunachal Pradesh. We all had a very good reason to rejoice on that day. India had scored a major victory in the Indo-Pak War of 1971 and we took pride in the fact that we had a role in shaping that epic event in India’s military history.